By now most of you have probably already seen the preview of the Petty Gods cover over at Grognardia. I appreciate that most people seem to like it.

When starting this cover I was trying to choose between three different ideas. Should I do a bunch of petty gods front and center? Or perhaps I could show Azwa (the petty god I illustrated for the interior) turning a fighter into stone? Or should I show some intrepid adventurers in a world filled with petty gods?

As you can see, the third idea is the one I chose. There is still an homage to Azwa in the great stone head in the background. But, if you look carefully you may notice lots of faces of petty gods hidden amid the things of the world. The story is quite simple, I hope you enjoy it. 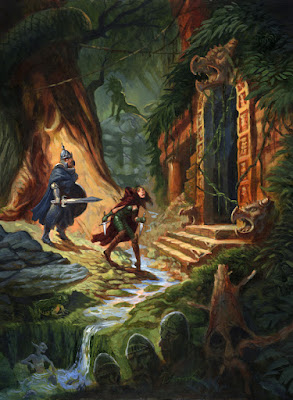