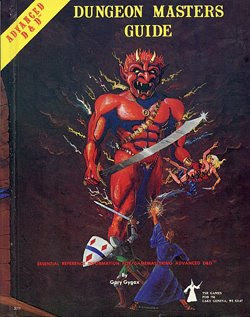 Here we are, #1. Should be no surprise that it is the original Dungeon Master's Guide. I've mentioned before how this book was my first exposure to D&D. I had no understanding of how the game played but this book evoked a fantasy world and a mystery that intrigued me deeply.

Some of my favorite things were the explanations of unfamiliar words like milieu and campaign. Expert hirelings - for some reason the sage was interesting to me. Aerial combat. The sample dungeon! Stronghold construction and siege - something sadly lost in later editions. Artifacts, in particular Baba Yaga's hut and eye/hand of Vecna of course. Random Dungeon generation - which inspired Dungeoneer. The random city encounters table is particularly good. Alphabetical monster charts - which I'd read before ever seeing the Monster Manual. All those wonderful random charts in the back were inspiring and useful.

Then of course were those great illustrations. There is no honor among thieves. Darlene's scratchboard illustration on the page discussing infravision/ultravision. The guy trapped in a flooding room with the skeleton coming towards him. Sutherland's footer illustrations under the random dungeon generation pages. Emerikol the Chaotic!

This book still holds an enchantment on me and just looking at it stirs the imagination.