D&D art that could have been

The passing of Ellie Frazetta has gotten me to thinking about a particular era of fantasy art that holds a special place in my heart. And one of my favorite artists from that time was Jeffrey Jones. 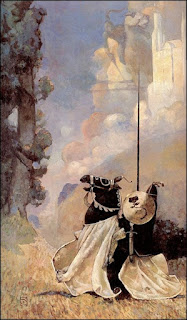 What if Greyhawk looked like this?
Sometimes I wonder what it would have been like if Gary & co. had different taste in art and had access to different kinds of artists when D&D was first published. 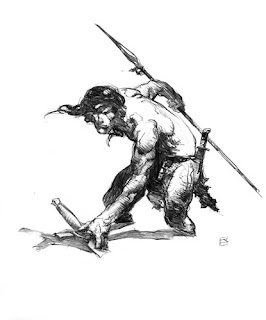 From 1967 to 1976 Jeffrey Jones worked as a freelance illustrator, starting in comics and moving to novel covers, many of them fantasy. His style of fantasy, to some degree inspired by Frank Frazetta, is best described as "romantic fantasy" a style considered quaint by today's standards. Yet a type of art I am still very much enamored by. Though I dare not let a hint of it show in my current work if I want to still get commissions. 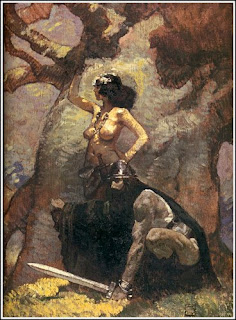 Jeffrey Jones left working commercially in order to pursue "fine art" in 1976, joining a studio with Barry Windsor Smith and the great Michael Kaluta. The aesthetic of these artists is radically different from the kind of fantasy art that was being published by TSR during the same time period. I'm qualified to say their work was considerably more sophisticated in terms of their design and technical skill. 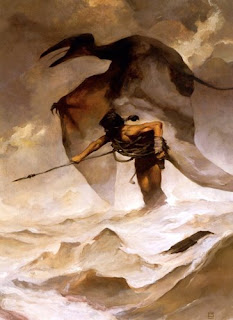 Of course there is so much nostalgia tied up in that old D&D art that today it is difficult to separate feelings from the equation. And as with all discussions regarding beauty the eye of the beholder reigns supreme. Still, there is one painting Jeffrey Jones did that it is remarkably easy to make a side-by-side comparison. 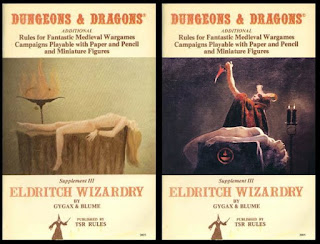 In these strikingly similar compositions it is easy to imagine what the original books could have looked like. (Though the intensity and darkness of this piece is unlike most of Jones' work.) Jeffrey Jones has always been one of those artists who other artists admire tremendously, but he never saw as much commercial success as this admiration would seem to warrant. An excellent compilation of his work was published a few years ago that I highly recommend. 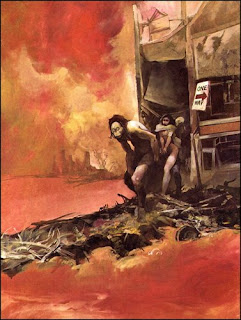 Imagine if Gamma World looked like this.
I confess that Frank Frazetta would be my dream artist for old D&D, but he was already too famous by the time D&D was invented. Jeffrey Jones was just at the height of his commercial work at this time, and I would have been happy to have been influenced by his work as a young developing artist. I didn't discover him until well into my 20's.

The one edge, and really the most important edge, that the D&D artists had was their sense of narrative - their ability to convey what happened in the imagination of D&D players, as the cover of the 1st edition Player's Handbook so elegantly demonstrates. However I have little doubt that given the same task Jeffrey Jones could have risen to the occasion and delivered that special imagination and artistry of his own.