Beastie of the Week: Colonel Redcap the Battle Gnome 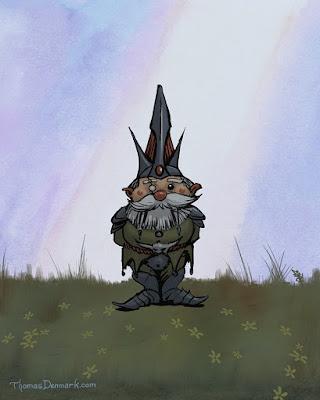 During the great Gnome-Goblin war of 576 many gnomes took on the mantle of battle hardened soldiers. Even though war is against their generally peaceful and family-loving culture.

One legendary gnome soldier was Finnigus O'Maliggan, or Colonel Redcap as he came to be known. Colonel Redcap was a grisly war veteran who rose to the ranks of commander of a legion of gnome soldiers. He was instrumental in the victory over the goblins at the crucial battle of green river valley which many consider to be the turning point of the war in the gnome's favor. Colonel Redcap has a number of unusual special abilities that make him a valuable ally and dangerous foe.

Invisibility & Mirror image: Colonel Redcap can simultaneously cast invisibility and mirror image so that his invisible real self can move to a safe location, while his mirror image dashes off in a different direction to deceive opponents. Oddly, fellow gnomes can still see the 'invisible' colonel.

Battle tactics: any gnomes within sight of Colonel Redcap will have +1 to all attacks and Save rolls.

Strategic planning: if given time before an operation Colonel Redcap can endow his co-conspirators with +1AC and +1 to Save rolls for 1d4 hours after the planning session.