An interesting bit of Dungeons & Dragons art history just popped up. An anecdote by Frank Mentzer about the creation of the famous mass market version of the Red Box. Apparently the original composition Larry Elmore designed for it showed much more of what a D&D game is really like with a party coordinating to take on a red dragon.

The original sketch is up for sale if you want to jump into the bidding war. Link below. 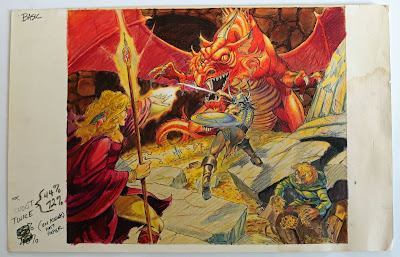 Initial cover concepts were similar to the previous edition, portraying a group of adventurers with a dragon. That was almost used, but it bothered Gary. After the color images were ready to be finalized in oils, after a lot of plans were made, Gary changed course. He asked Larry to focus the action on just one fighter and one dragon...