I just got back from Emerald City Comicon, which is rapidly growing and becoming the next go-to convention on the West coast next to the San Diego Comic Con. Gaming had a relatively small representation at ECCC, so I'm looking forward to Kublacon next month. One of the best gaming conventions here in the West.

Sketchbook 2016 Gamer Edition: I did put together a sketchbook and had it for sale at ECCC, but I'm still working on the Gamer Edition because I think it is a cool idea. Once that edition is done I'll make them both available on Lulu and DriveThru (and possibly some other online channels I've been considering). All that remains is to complete the stats and descriptions of the monsters, characters, and stuff in the sketchbook.

Mechanized Men of Mars (a Warriors of the Red Planet adventure), probably the most anticipated item is very nearly done. I have one chapter left to refine. Maps and art are all done. This should be done soon.

Beasties. To me this has been the most fun to work on. The art is done, there are about a dozen monsters left to finish the descriptions of. Also some of the goodies in the back of the book need a few additional details. This should be done right after Mechanized Men of Mars. 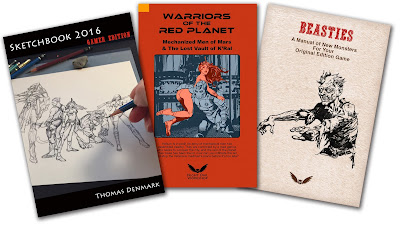