One of my favorite things about Gary Gygax, other than his florid language, was the way he tried to systematize everything. An impossible task, but still interesting. The way he tried to boil down the moral law into an axis of good/evil and law/chaos, or the way he tried to organize all the possible adventurer types into fighters, clerics, wizards, and thieves. I always enjoyed these attempts he made, perhaps my favorite was the inner planes. Particularly the detailed breakdown as he presented them in Dragon 73 the Sorceror's Scroll: The Inner Planes. Here is a snippet: 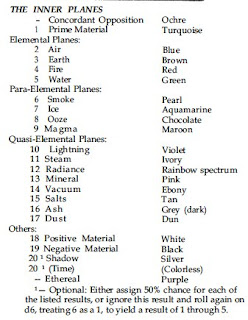 (the 5-cd Dragon compendium is so handy!)
This tendency towards systematizing everything probably led to the success of the original Dungeons & Dragons. How else could the mad (genius) ravings of Dave Arneson be transformed into the masterpiece that was the original white box? But this tendency also lead to absurdities, some of which have since been purged from the game. I won't dwell on what those are. Instead I want to propose an idea I've had brewing for a while. What if Gygax had developed his method of systematization to a finer degree at the time he wrote the original booklets, and what if he'd kept the focus on six character classes, one for each ability?

Here is a systematization of 6 basic character classes, one to conform to each ability. To avoid all the thief or not nonsense so often talked about, I've replaced the thief with a class called the "scout". Not only is it less morally ambiguous, it allows for a bit more freedom in describing what the class can, and cannot, do. 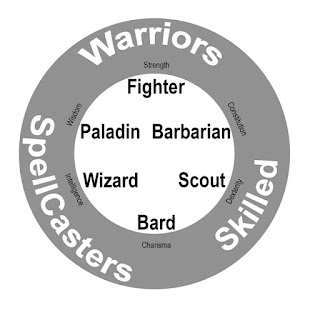 So the basic classes are: barbarian, bard, fighter, paladin, scout, and wizard.

The beauty of this is the way it synchronizes with each of the abilities, fills each of the roles in an adventuring group, and creates a seamless circle.

Astute reader you've noticed the cleric is missing! I've always been bothered by the definition and role of the cleric. Also it's the class that any group when creating characters inevitably says "someone has to be a cleric" so they can have their traveling hospital. So, I've chosen to replace him (or her) with a more appropriate class: the paladin, clearly a warrior but with a divine mission and some spellcasting and healing powers. A much more reasonable candidate for adventurer than some priest best left to his studies in some dusty monastery.

This is just a fun variant, or speculation on how a different type of systematization could be applied to the original d&d.