The Dungeoneer RPG has six core classes, we've already looked at the Warrior. This week we take a look at the multi-talented, lyrical, Bard. In Dungeoneer the Bard fulfills the roll of team support member. Not as powerful in combat or magic as other classes, the Bard works best in a team where she can encourage the other members to greatness. 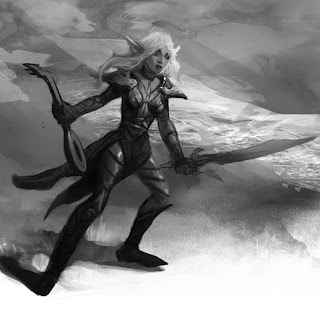 Bard
You are a wandering minstrel and keeper of lore. Your music can inspire allies and destroy the morale of enemies. Your singing voice is attuned so that it can influence the fields of magic that permeate the world. This gives you some spell casting ability.

Bards are multi-talented performers, adventurers, and dabblers in magic.  They study the oral histories of cultures, through song and tales. They have a broad range of skills ranging the spectrum from common thievery to the hidden knowledge of arcane lore.  You may not be as powerful in battle as others, but your many abilities make you handy in many situations.

Lyric: a chosen ally gets +1 to all attacks this turn.
Battle Hymn: all allies get either +1 Melee or +1 Magic this turn.
Symphony: at the end of each combat round, all allies recover 1 Life. A symphony lasts the duration of the encounter.
Academy: you establish a music school that attracts followers to your style of music, these followers are extremely loyal to you.