Empire of the Domains mini-game 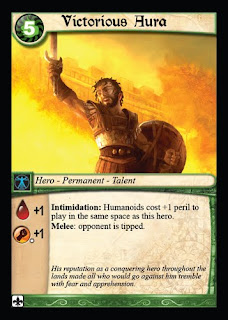 One of the things I miss from the early days of playing role-playing games is the sense that your hero was becoming important in the world. I don't mean just saving the world or traveling to other dimensions and slaying demi-gods. We played for the goal of your character eventually becoming "name level" and earning a castle and land to rule.

Another thing I enjoy is when your character can make a permanent change in the world. Once an evil tyrant was deposed that nation would be changed by the leader who replaced the tyrant, or sometimes that replacement leader would be you! This is often referred to as an "end game", and it seems that fantasy RPG's have very much lost their end game. Nowadays it's all about gaining levels and getting more powerful stuff. Cool things to be sure! But where is the satisfaction of completing a campaign? Maybe in this day and age it is too hard for a majority to keep their gaming group together long enough to play through a whole campaign. Or maybe rpg's are so fun nobody wants the campaign to end. Whatever the reasons I think there is room for this style of play to return.

With the Dungeoneer RPG being able to have a regular meeting time is less of an obstacle. Much like how a boardgame is played in 1 session, Dungeoneer RPG can be played in a single session, or generally as few as 2-3. But still maintaining the satisfaction of a campaign. This makes the end game an imperative.

The end game for Dungeoneer RPG is a little mini-wargame called "Empire of the Domains". Your heroes accomplish world domination one nation at a time by defeating evil tyrants, slaying horrible beasts, even by leading armies to victory. Eventually your hero will be a king, a clan leader, or rule a wizard's guild. This progress is tracked on the world map where the side your heroes choose will slowly take over the world one region at a time as you succeed in your adventures. These sides can be classic good, neutrality, or evil, or whatever factions your gaming group chooses to come up with.

Upon achieving 10th level your hero will join the immortal ranks of great heroes before him or her, and the world will be forever changed.