The Space Noble and the Space Princess

Alien kings, space monarchs, rulers of the known universe, decadent nobles of a highly advanced and technological civilization, and of course Space Princesses are staples of space operas, sci-fi sagas, and tales of strange worlds and other dimensions. The Warriors of the Red Planet roleplaying game provides the basics needed to run a Sword & Planet style interplanetary fantasy romance campaign using the classic OSR style rules. However if there was one class that was missing it was the Space Noble -- the aristocracy of the dying red planet. This supplement endeavors to fill that gap with a very playable royal character class, though its primary purpose is to describe the NPC’s that the player characters will encounter.

The Space Noble is designed to work with any science fiction or science fantasy OSR style RPG that is based on the original fantasy roleplaying game. 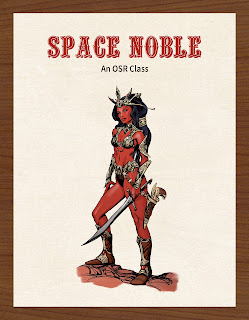