Today I am starting up the A Princess of Mars Adventure Design Diary posts again. I worked with a  researcher to go through the source material and compile it all into game-useful data. Now I am referring to that data as I build out the adventure. Most of the development remaining is editing, art, and layout.

In this NPC update, Sola's mom Gozava, you can see an improved stat block which provides some useful game info for the GM to be able to quickly refer to. In the spirit of turning the adventure into a sandbox rather than a railroad Gozava's fate is yet to be decided, while in the book she was tortured to death. Perhaps the PC's save her from this cruel end? 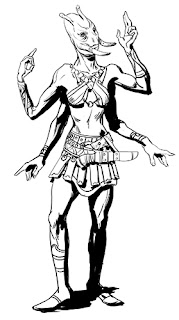 A green martian female in the retinue of the cruel Tal Hajus. Too small to breed by tribal standards (only 10ft tall), she was forbidden to mate as dictated by Thark custom. Slowly this fostered an aversion to the awful cruelties and loveless existence of her people and helped her nurture a shy sympathy towards others. She cares little for the barbaric ways of the greenmen.

Thus it was that over 5 years ago, she entered into a fateful tryst with the chieftain Tars Tarkas and each unwittingly fell in love with the other. Together they quietly bore a forbidden egg completely outside tribal law, the penalty for which is death. While he was away on a years-long military campaign, Gozava secretly hatched their hidden egg alone, begetting a daughter upon whom she lavished affection - an occurrence so rare among the greenmen as to be unheard of in living memory.

Knowing she could not keep the child hidden for long, Goziva conspired to mix her in with the other tribal younglings from that year’s incubator expedition. Though initially successful, the ruse was later uncovered by the ever-vigilant Sarkoja, though the child’s identity remained unknown.

Betrayed, now Gozava is to be brought before cruel Tal Hajus to answer for her crimes. Without hope for mercy, she will likely be subjected to unspeakable tortures to force a confession.

“Don't tell me the moon is shining; show me the glint of light on broken glass.”

"When the legend becomes fact, print the legend."
- Maxwell Scott