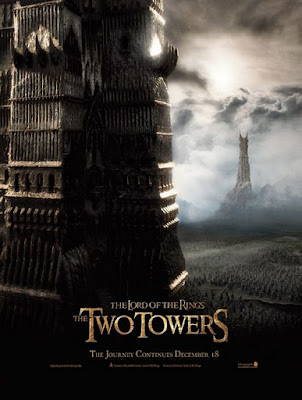 In 2002 the best of the LotR movies came out. History often seems to have interesting parallels to it, who could have imagined that the themes in good professor Tolkein's mighty trilogy would tie so directly to events surrounding the release of these movies? Film critic John Mclaren in his review of The Two Towers puts it well:

The screenplay explains (with barely disguised contemporary resonance) what we are protecting in Western civilisation when we defend ourselves against those who would wish to destroy it. When Sam tells Frodo that there are "some things worth fighting for", when Merry tells Pippin that there "won't be a Shire" unless they do something about it, when King Theoden laments that "the sun has gone down in the West" this film could be entitled not the "Two Towers" but "the Twin Towers". It is Miltonic in its scope. It is cinema as art.

I love Peter Jackson's interpretation to film of LotR. Each film is unique and wonderful in its own way, and work remarkably well together as one giant 9+ hour movie. But of the 3, The Two Towers is my favorite, and is the only one that wasn't improved by the "extended editions". The theatrical release was perfect to me. The pacing, the framing devices, the epic clash of good and evil so well drawn. And it also had an eerie relevance to what was going on in the world at the time. (ok, I could have done without Legolas surfing down steps on a shield, but that is the only thing I didn't like, and that is only a minor annoyance).