Dune would make for some great old school 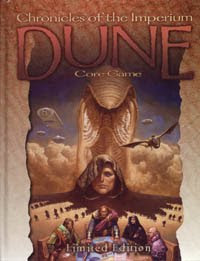 One of my prized possessions is the Dune roleplaying game published by Last Unicorn Games. More specifically it was published by Wizards of the Coast after they bought LUG. It was a limited print run of something like 1000? copies. I got it at my first Gen Con where I snagged 2 copies (1 for a buddy and the other for myself). I had high hopes of a series of Dune rpg products, but apparently the relationship soured between the Dune licensors and Wizards.

I have recently reread the original and am working my way through the sequel Dune Messiah. I recall not caring for Dune Messiah when I first read it as a teenager. My opinion isn't moved much, but I do like it ever so slightly better than I did. It certainly requires a more mature understanding of politics and life in general to appreciate. Still, it is an ephemeral shadow of the remarkable original. Recollection tells me that Children of Dune is better than Messiah, which about half way through gets really good, nearly to the level of the original. And I do remember loving God Emperor, Heretics, and most of all Chapterhouse Dune. So I'm looking forward to seeing how they hold up for me now over 20 years later.

I didn't find the various spin offs done by Kevin Anderson and Brian Herbert to be quite as compelling.

My first exposure to Dune was the 80's David Lynch film, which I liked so much that I was compelled to get the books. I suppose if I had read the books first I'd hate the film, however now I think of the movie as the "Visual Guide" to the book (with very little else to do with it).

It occurs to me how very old school Dune could be as an RPG. It has classes, races, and levels, and a spirit to it that I think would perfectly fit in a modified Swords & Wizardry game. As great as Dune is I wish it had been exploited more as an IP. I could happily fill my house with Dune products as much as I love that universe.