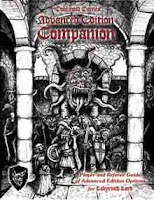 We've begun using Goblinoid Games expansion to Labyrinth Lord: the Advanced Edition Companion. So far so good, I'll have a longer report once we get a feel for it. I like the tone of the writing and the content, but my first observation is I'm not a fan of the various inconsistent modifiers for different stats. This is one thing I think AD&D got wrong and wasn't fixed until 3rd edition. So we are ignoring that, and using the standard modifiers as presented in Moldvay basic D&D. I don't know what ramifications it will have on "play balance", but we'll compensate as issues come up. Oh, and I don't care for the gothic "flavor font" being used on headers and in too many other places. But that is just a quibble, the rest of the graphic design and art are perfectly retro feeling.