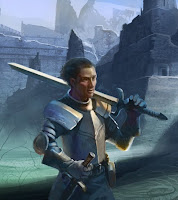 The Dungeoneer RPG treats the race/class matrix a little differently than traditional fantasy RPG's. First is the addition of Cultures. Nearly as important as your innate abilities acquired through your character's race, are the things she learned in the culture she was raised in. You choose the culture for your character at the beginning of the game. Or the Dungeonlord can deal culture cards out randomly.

Cultures
Ancient: the ancient civilizations, thought to be long lost, remain in various hidden and isolated regions of the world. They hold forgotten knowledge, but are also somewhat naive to the modern world. +1 MG

Esoteric: from the mysterious lands beyond the seas, esoteric people have unique skills and customs that seam strange and fascinating. +1 BL

Imperial: people from the conquering nations of Dolmar, Ilbor, and Baulephor may seem to have a sense of supremacy to others. They are citizens of powerful nations and accorded the rights that come with citizenship. They are often trained professionally for the military. Beyond the borders of their lands though, they are often hated and despised. +1 ML

Rural: these are simple folk, peasants and farmers that come from regions far from cities. They may seem uneducated, but they have a wisdom that comes from a sense of community and making a living through hard labor. +1 TL

Savage: far from the civilized lands are people that live in tribes and forage for a living. They are hardy and have valuable survival skills in the wilderness. +2 ML vs. chosen foe

Is this the final list of cultures? I don't know, playtesting continues, things are revised and improved. This has been pretty stable for a while now and works well in play.