An update on Dungeoneer products in development: 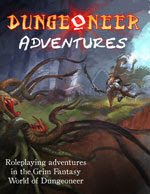 We have been working on the Dungeoneer roleplaying game for a couple of years now. Hopes were that we'd have it in time for the Gencon game convention this year. That won't happen. Simply put I am far more concerned with quality than with a deadline at this point.

Currently Dungeoneer is being developed into a line of miniatures by Aberrant Games (I've seen the early casts, they look very cool), a roleplaying game by Goodman Games, as well as the Dungeoneer Scenarios book by my own Studio Denmark to support the card game. So my hands are quite full at the moment.

If you haven't been following the designer blogs by Richard Plockington, who is writing and co-designing the RPG, I recommend you take a gander. They are quite interesting and I'm enjoying seeing Dungeoneer through another designer's eyes.

Here is a very rough, very unreliable schedule for these various Dungeoneer products: