Like many in middle school I started designing my fantasy heartbreaker when I was around 12. Anyone who is a DM becomes a game designer as soon as they start modifying the 'official' rules. One concern I have about the current batch of players of 5e is that they seem to have an even more devotion to the letter of the official rules than any of the 'rules lawyers' from my youth. I know, that's one of those "kids these days..." sentiment from an old man. So as long as they are having fun and exercising their imaginations it is all good.

This game that eventually became the Dungeoneer card game lived most of its life as a pseudo-RPG. I say pseudo because it was always kind of boardgame like in its design philosophy. I didn't know it at the time, I was just trying to make something fun and interesting to play. It very naturally evolved into a card game. Still, I wonder what it would be like to finish that RPG I started back then. A major motivation in becoming an illustrator was so I could illustrate my own games. Looking back at those old drawings is painful as all I see is how to draw them better. But I suppose there is a certain old-school charm to them.

Here is a scanned in page from one of my attempts to actually lay the RPG out with art. I was still enamored with the 3-column layout that was popular in the era of TSR modules that I think started around the time of the first Dragonlance modules. Now I find that format too cramped and ungainly. This was originally laid out back when I was just learning about desktop publishing in Aldus Pagemaker, which Adobe bought and turned into InDesign. 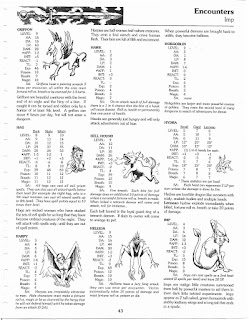