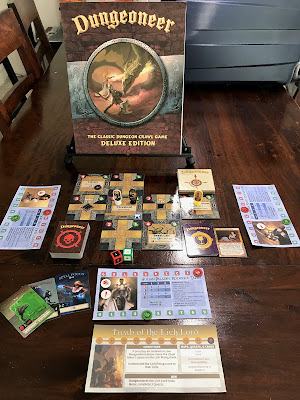 Dungeoneer is over 15 years old, and almost from the time it was published I was already redesigning it. The game was quite well received but always fell into that "cult hit" category. It sold well enough to stay in print, but never quite gangbuster numbers. I always felt it was a pretty strong game with unfortunate production short comings.

The game should have come with dice and tokens. It is really silly that it didn't. I was a naive young designer and was just happy it was published. It deserved so much more. Still, it is a lot of fun to play and any gamer has dice and tokens around they could use to play the game when they got a deck.

There was another thing, the rulebook was never fantastic. It was overly written and hard to understand. They say a designer shouldn't write their own rulebook and that's true! I got a lot of help from Atlas Games who did the best they could with what I gave them. Part of the problem though wasn't the rulebook, it was that there was genuine kludgy-ness to the game. Unnecessary complications, that had a purpose when the game was designed but really could and should have been streamlined.

Dungeoneer Deluxe.
This is my redesign of Dungeoneer from the ground up. Yet, somehow it is exactly the same game with all the kludgyness gone. It is streamlined, fun, competitive, finely balanced and more tactical. The game I was trying to design in the first place. Also, it has all the components needed in the box! I even designed some special dice that makes combat lightning fast and easy to play even for younger gamers.

Also, my art skills have improved (I think) and I've made some great new art for it!

I'm posting this now because I have a prototype that I'm bringing to Protospiels around local game conventions and events. If you are in the San Francisco bay area and go to Dundracon or Kublacon you can check it out, play it, and tell me what you think.