How Many Barsoomian Mars RPG's Are There? 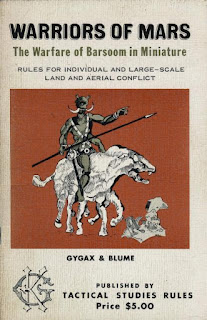 Fans of Edgar Rice Burrough's classic Mars novels (barely novella length by today's standards) have it good these days with several high quality fan made and official Barsoom inspired RPG's. This wasn't so until somewhat recently.

Before Warriors of the Red Planet the only Burrough's RPG material was few and far between, there was the ill-fated Warriors of Mars by TSR that was quickly squashed by the Burrough's estate. Which wasn't really an RPG, it was a miniatures war game. There were a few other wargames with some RPGish elements like John Carter Warlord of Mars and John Carter Warlord of Mars ... yeah, really and they came out a year apart. But the influence of ERB and his incredible imagination could be felt all across the world of tabletop gaming.

btw. While looking up the links for this post I stumbled across my old review of the Disney John Carter movie, which I gave pretty positive marks. I stand by that review, especially when compared to what they've done with Star Wars since then.

Do you realize there's a 12 word sentence you can communicate to your man... that will induce intense emotions of love and impulsive attractiveness for you deep inside his chest?

That's because deep inside these 12 words is a "secret signal" that triggers a man's impulse to love, adore and care for you with all his heart...

This impulse is so built-in to a man's mind that it will drive him to work harder than before to to be the best lover he can be.

Matter of fact, triggering this powerful impulse is so important to having the best possible relationship with your man that once you send your man a "Secret Signal"...

...You will soon find him open his mind and soul to you in such a way he never expressed before and he will perceive you as the one and only woman in the universe who has ever truly appealed to him.

Where to find me Online