In the 80's hey day of TSR Roger Raupp was the most ubiquitous artist in the pages of Dragon magazine.

Raupp joined the Dragon staff doing art and cartography, and eventually became the Art Director for Dragon, Strategy & Tactics, and Polyhedron, doing layout, keylining, graphic design, cartography, and some of the art for the magazines.
One of the enjoyable qualities of his work was how down to earth it was in dealing with the fantastic elements of Dungeons and Dragons. His proportions were not overly exaggerated to make a figure super heroic. His women were not drawn impossibly beautiful clad in chainmail bikinis.
The first illustration I recall seeing of his was in Dragon issue 83, the first Dragon I ever purchased. It was for The Dancing Hut, a terrific D&D style treatment of the Russian legend of Baba Yaga. 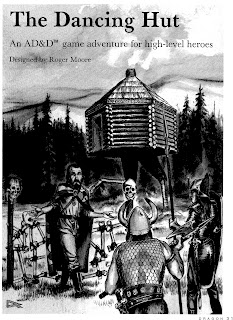 He painted 72 Magic the Gathering cards in the period it was exceedingly lucrative for an artist to be doing Magic cards. Perhaps this set him up nicely to pursue an independent art career, or to retire on a beach somewhere.

Rudy Didier Rauben
On a forum post in 2007 he posted this:

You'll note that the artist formerly known as Roger Raupp is now going by the name "Rudy Didier Rauben".... or Bonobozo

It seems he wanted to make a radical change in his art career and distance himself from the work he was known for. Other than a book called Immanence of Myth I haven't been able to find much of Rudy Rauben's work.

Update:
A user who goes by the name Rowan posted on EN World:
"He [Rudy Rauben] was one of the original artists for the Everway roleplaying game, so I recently had to track him down to update his contact information for the new edition I'm about to publish in order to pay him royalties. I was corresponding with him in 2012, but after that he dropped off the grid and his email service disconnected. I visited him in the hospital in Bellingham, Washington on November 24, 2019, where he was dying of liver failure. When he stopped responding to my emails on his new email service, I contacted his sister in Arizona. She confirmed that he died on December 17, 2019 in Bellingham, Washington. She also told me that no obituary was published, he was cremated, and his ashes were scattered in the Cascade Mountains."