The original Dungeoneer: Tomb of the Lich Lord featured a map card called Well of Healing. It was one of the few places a hero could go that wasn't filled with danger. It had a low Peril value and it provided the opportunity to heal wounds. Every Dungeoneer set since then has had a variation of this idea. Legendary Dungeoneer takes this idea to a whole new vicious level. Here is Chamber of Channeling: 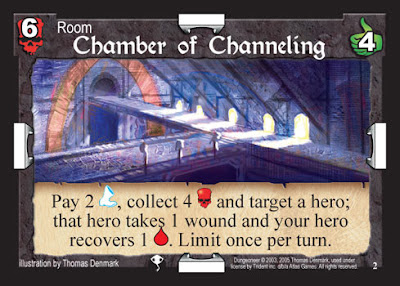 Here you can recover wounds, but you "channel" that wound to an opponent! Of course there is a cost, 4 Peril and it does take two movements to perform. That's it for this sneak peek, next week we'll begin to take a look at the really powerful stuff you'll find in Legendary Dungeoneer: Wrath of the Serpent Goddess.